Yes, we are Italians and all China talks about us, we have a fantastic culture, our design is recognized  worldwide, our cars are the best, our food is amazing and Chinese are so in love with our culture and taste that they buy our fantastic goods and import our products. In fact the first exporter of goods towards China is …. Japan, followed by South Korea (yeah, very close cultures). Ok but then in third position is…. USA (of course second biggest economy in the world). Then in fourth is… Germany (yeah because of cars). But we are in fifth, right? No fifth is Australia (yeah, because it’s near…not really, 12 hours of plane, like us), then Russia followed by the rest of Europe, Brazil and Malaysia.

This is a good position considering that in 2015 we are talking about the 0.4% of the Chinese GDP which in relation to ours puts us in the last position in Europe for percentage of exports to China just before Bulgaria and Romania. 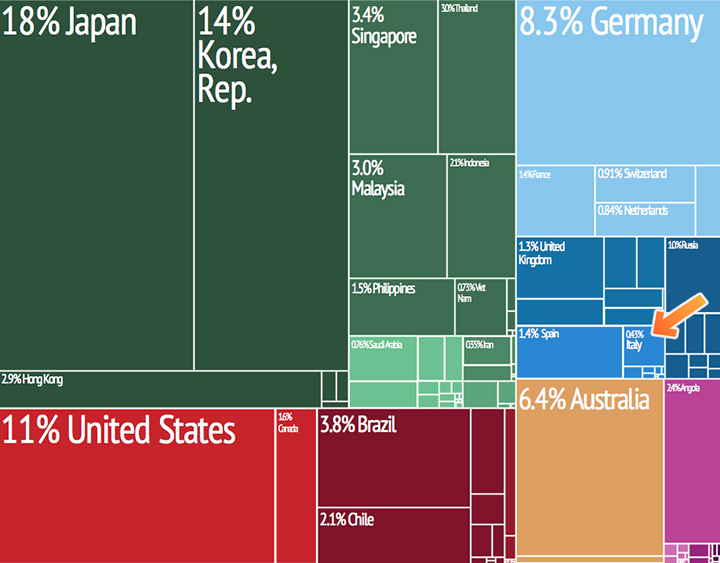 So where has Marco Polo gone? He’s probably in some small town or in a villa in the countryside of Italy far from being a poet or a hero, eating his tomato pasta on the terrace and complaining about the economy but, if proposed to come to China to sell his goods, he would say that his children have fever, the cat is facing a depression or his wife is jealous of Asian ladies and by the way he’s scared of planes.

So the reality today is that we are not present in the world’s  biggest market and economy even if they wanted us so badly.

The wine is French, Chilean and Australian because these people dropped their tomato pasta in the nineties, came here and built a culture of their products. Even in terms of language sparkling wine is called “Champagne”; can you explain to me how you are going to tell almost two billion people that we have ‘Prosecco’? Do you know how much advertisement is involved to build a new product culture? It will be impossible for a country 20 times smaller to explain the surprised man in the street that: “Yes! In Italy we produce wines!”. 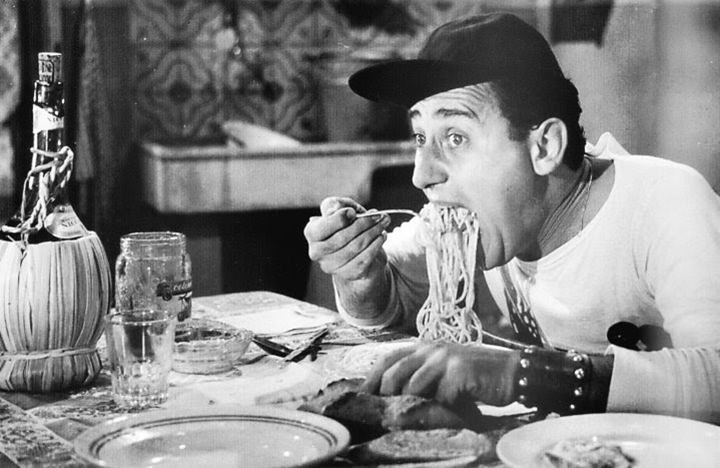 But we do have the cars! Yes we do, and the Chinese love them. They love our Lamborghinis especially from when the owner is a German group and they go crazy for our Ducati motorcycles from when the management is Volkswagen. They would love Ferrari, but at the end they buy McLaren because they don’t sell you a car with one litre of gas in the tank that you have to drive outside the showroom by yourself, but instead, they send you a valet with white gloves that explains for an entire day how the car (fully fuelled) must be driven and offers you champagne and caviar at the end of the tour: it’s called VIP treatment, it is considered a must when you buy a 3 million RMB car and… we don’t know what it is.

Absolutely no trace of Fiat or Alfa (don’t even have the dignity of a Chinese name). The first one came here with a strange expensive model based on a 25 years old production chain expecting to fight against Toyota, Audi, BMW and today the fully electrical car by BYD or Tesla (yes, fully electrical); it was an exhilarating  joke, everybody was asking if they sent somebody to China to check the market before.

Even the culture of Italian food today is managed by the Chinese because there are few authentic Italian places and the ‘Italian taste’, in the idea of Chinese people today, is so different that a real Italian dish could be considered uneatable.

The fashion market situation is, if possible, worse: very few luxury brands, usually owned by French groups or getting the crumbs of a huge market in the hands of fake Italian brands (because yes we do have reputation in fashion but we don’t know how to use it) like Versino, Ochirly, Smalto, Poths, Goelia, Vfc, Koradior that are the giants with hundreds of shops in the biggest cities, huge budgets for advertising campaigns and are helped by the government. The government in China helps its companies, it doesn’t put anti dumping taxes on foreign ones.

Again the numbers of the western fashion market are in the hands of Sweden Usa and Spain with H&M, GAP and Zara.

The furniture industry is a big question mark on the word “Where”.

Italian companies are completely out of the big market for: scarce production capabilities, expensive prices, long delivery times, bad service and sometimes even scarce quality. In a country in which everything is about speed delivering in 90 day plus shipping after 100% payment upfront means cutting yourself out. Our Chinese clients would love to buy Italian furniture, the price is not an issue for them, but when they hear the delivery times they run away very fast.

Italian companies are not able to design for China or to localise their products in terms of size, taste, interface. Most of our design products are useless in this market.

Imagine that we invite Chinese entrepreneurs  to the Milano Design week, but then they face difficulties in showing their goods. Do you really expect these people to buy from you?

The Italians are here, not Italy but Italians. It’s a brand new generation of emigrants, with master degrees on which Italy has invested that are beneficial to China for their works and ideas. People that were not only able to get a flight but to change their lives. Not bartenders or pizza makers but architects, designers, engineers, top managers and directors. Chinese love them, especially when they buy them.

So how come we produced such a disaster?

Thanks to our stupid but beloved belief that Medium and Small Companies were the ‘bones’ of the country. Our companies being too small to make research and to afford newest technologies, being in the hands of culturally lazy, stubborn and individualistic entrepreneurs, unable to group with each other to make a bigger force (like French, Germans, English, Spanish and Portuguese did before us) and working to improve their personal bank accounts more than being beneficial for a system. And don’t tell me that they were “hard workers” because they were going to the office at 6am in the morning, here everybody goes to the office at that time.

Thanks to our ignorant foreign affairs ministers, elected even if they didn’t know a word of English, who where not able to come here and sell our precious Prosciutto, Salame and Parmigiano. So today these products are out of market because they are ridiculously expensive and even under the eye of health regulations. The only Italian cold cuts sold in China have to be deboned while the Patanegra from Spain is boned, less expensive and considered the “Top”. Chorizo is sold everywhere, Salame not sliced even forbidden.

Thanks to our bizarre battles against imported products that imposed middle age anti-dumping taxes on goods from our next future market. I think the most bizarre case is about taxes on bicycles made in China, regulation decided by some brainless suicide bomber that didn’t even know that all the Italian bikes had frames produced in China.

So what to do? Is everything lost? Yes it is! At least for now.

So if you are in China today and you invested on developing a market, then stay. If you are not, don’t come, you will get hurt really badly and start from the end of the queue (the queue is very long in such a big country). Keep eating your tomato pasta and prepare yourself for your next travel to Africa so that you will be ready for the next market revolution.

But please, this time, actually go there!